After missing last years race due to illness, I was worried it would be the same story this year after fracturing my radius a few weeks ago. Luckily my wrist had healed enough and I was once again ready to tackle the Belgian cobbles.

We travelled to the race on Saturday so we could recce the last 20km of the course once we arrived and see what we were in for. The final section only involved one climb, the Tiegenberg, and the run in to the finish was fairly flat, with the last 3km being quite technical. It passed through two kermesse courses I’d previously raced on. After the recce, we rode back to the hostel, got showered and went down stairs for a dinner of chicken, mashed potato and salad. Bed time.

We had a fairly chilled out morning as the race didn’t start until 2pm. Breakfast was the usual (yep, you guessed it) six Weetabix and some bread, ham and cheese. This was then followed by a pasta meal at 11am, which I had a large serving of. We swiftly headed to the race HQ, got our numbers – we were quite excited at first as they were stick-on numbers – but they ended up being pretty useless and we reverted back to the good old safety pins! We then went to the changing rooms where it was cool to see we’d been allocated our own South East room. Ian got the bikes prepped and we were shortly rolling to the start. 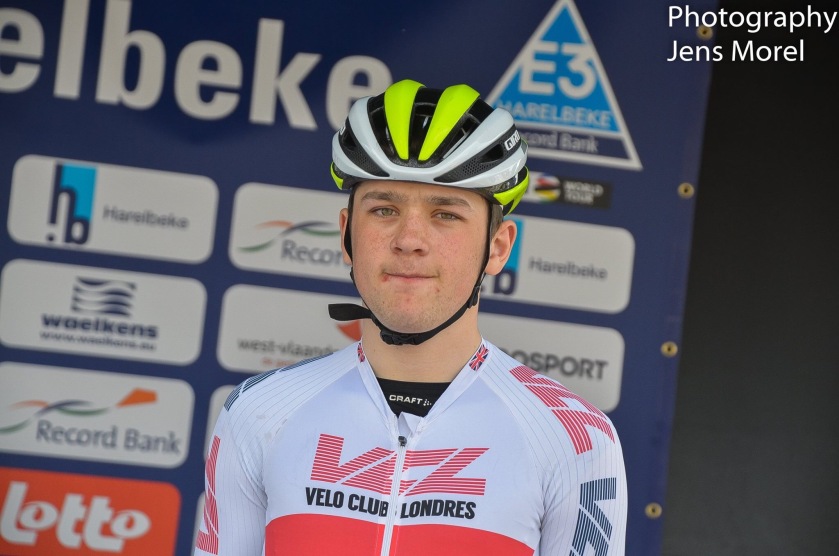 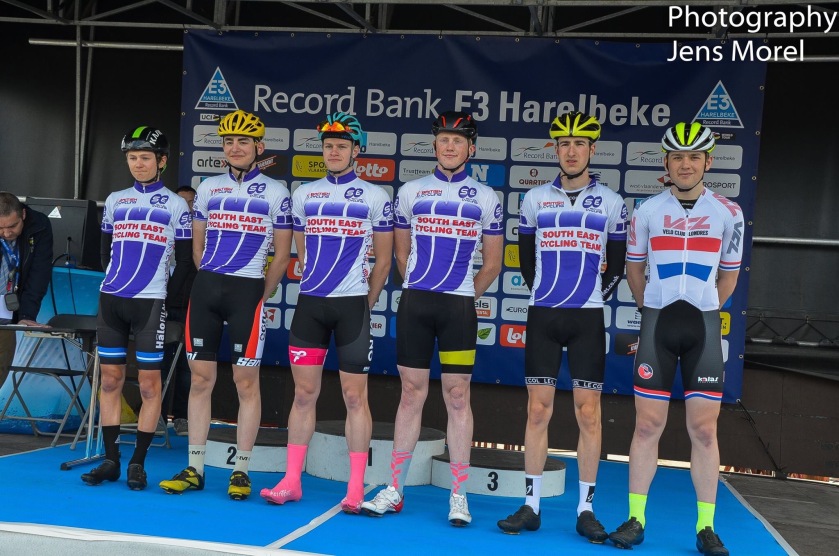 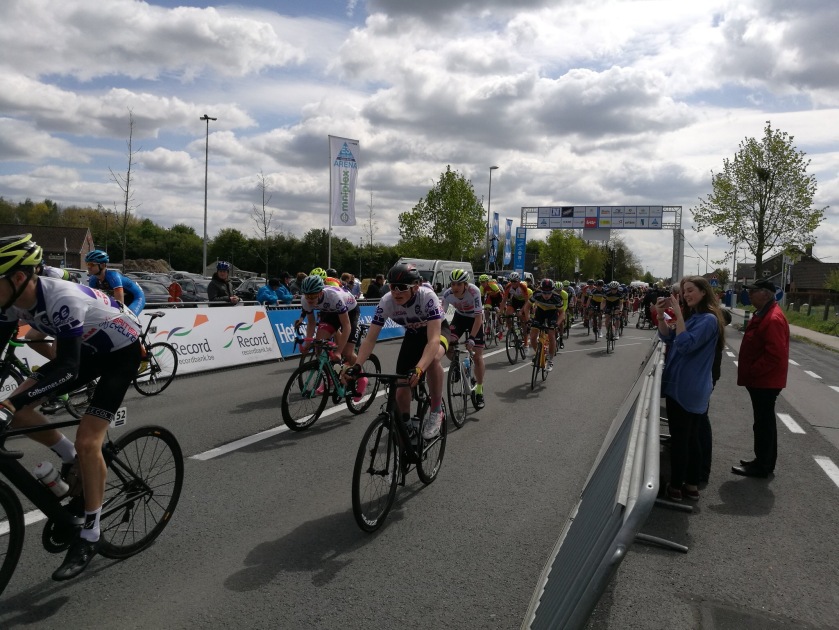 Gear check done and we were about three rows back as we waited for the neutral car to roll out. After 3km the race was underway. I was keen to keep at the head of the race as I didn’t want to get caught in any early crashes or splits. As I guessed, after 20km of racing there was a massive crash, completely splitting the peloton. When I looked behind me, I was surprised to only see around 40 riders left in the group and there were some Belgians who were keen to keep the group separated. However, within the next 10km, about 20 riders had made contact with our group. We hit the Knoteberg, which was 1.5km long, with a gradient maxing out 13.5%. I sat in about third wheel for the majority of the climb and pressed on at the top to secure some KoM points. It was back downhill for another 2km, before we went back up the Hotondberg which was fairly steady. I was still making sure I was at the front and followed a couple of moves. We hit the Kortekeer which had a nasty kick of 17%, which stung the legs a bit. We were now 57km in to the race and were hit with a long cobbled section which went on for 2km. I was trying to keep in the gutter as much as possible, partly to save the legs, but also the dodgy wrist! 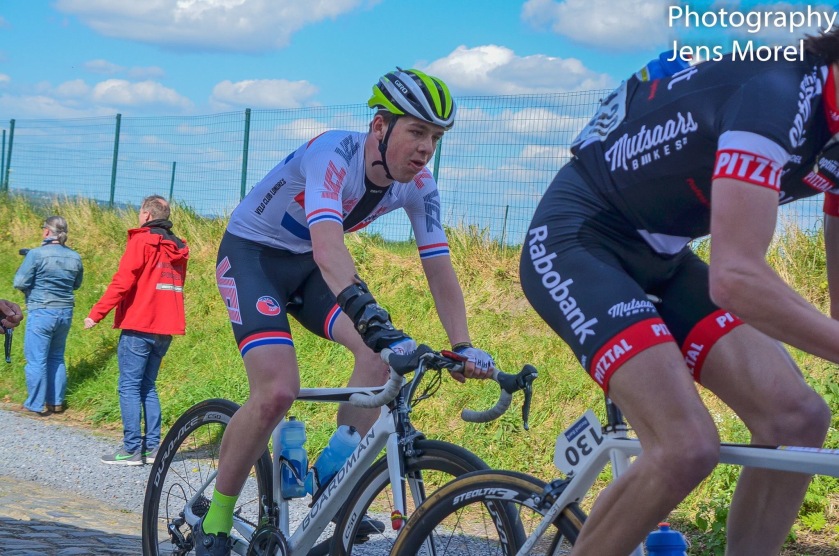 The Kapelberg passed fairly easily, however a sharp left at the bottom led to a rider sliding out in front of me. Luckily, I managed to avoid tasting the tarmac and fought back to the front for the Paterberg. This was a nasty one, even though it was cobbled, there was a gutter to the left hand side of the road. Unfortunately I was held up behind a chopper who caused me to keep stalling and unclip, this led to me having to chase to get back up to the leaders. By the time I’d reached the bottom of the descent I was back on to the front group. However, a small break had gone up the road and I was keen to bridge across. I held a small 10m gap, but was followed by the rest of the bunch. I made touch with the front group just before we started to hit the cobbles of the Oude Kwaremont. After riding it at Kuurne, I knew how tough it was going to be, but I kept it in the gutter where I could and managed to get over the top with the lead group of 25 riders. It was a long descent, but the group worked well together, rolling through and off. There was a chase group of 20 who made touching distance with ours when we hit the Varenstraat cobbled section which was 2km long. It was lined out, with us switching from side to side to make the most of the pavements surrounding us. We finally hit the Tiegemberg – the 9th and final climb – with 19km to go. I kept alert, ready for any big moves trying to get away.

Nothing gained a good gap and we were all together by the bottom of the descent. We hit 15km to go and I was keen to try my luck. I put a dig in but the bunch weren’t keen to let it go, across the next 5km I put in a couple more but they weren’t sticking. I tried to recover and 2.5km from the finish I threw in a last attack but yet again I was heavily chased. I started preparing myself for what I thought was going to be a bunch sprint. I found what I knew was a good wheel to be on, however, a last dash attack from 3 riders 1km to go was let go. We took the final left-hander. 700m to go. It started to get cagey, with no one keen to lead out the sprint. It opened up with 300m to go and with a bit of leaning I found my way through, I was just pipped to the line, ending up 5th and 3rd team. Successful day out. 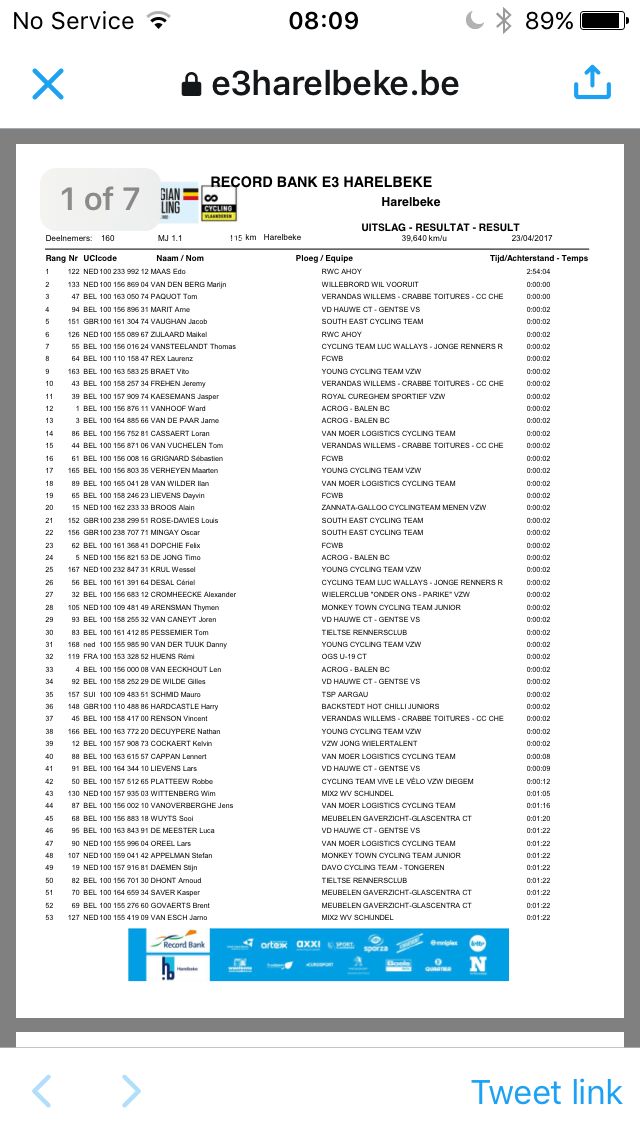 I was happy to be feeling strong at my first UCI race back since my injury. I hope all the riders who crashed are alright. Once again a massive thanks to John, Dave, Barry and Ian for taking us and all their help. Also to my sponsors: Pedal Potential for their support, Boardman Bikes for the fresh whip, Specialized for the fresh kicks and Galibier for their great kit. As usual, it was a pleasure to wear the colours of VC Londres across the pond.

I am a 2nd Year Junior Cyclist. I'm a 1st Cat Junior and hope to attain an Elite Licence this season, my Season will be predominantly based in Belgium racing UCI Junior Races with John Barclay and Racing the Junior British National Series with VC Londres. It would be a dream to win the British Champs again and I also hope to podium in Belgium and the UK. Keep up to date with results via my Blog View all posts by jacobvaughan14